The job of a car suspension is to maximize the friction between the tires and the road surface. This provides steering stability with good handling to ensure the comfort of the passengers.

A lot of the suspension system’s work is done by the springs to keep the car’s wheels in firm contact with the road. “Suspension,” when discussing cars, refers to the use of front and rear springs to suspend a vehicle’s “sprung” weight. The used rear suspension assembly may be of the dependent or the independent type.

In the used rear suspension assembly of the independent type all of the wheels are mounted and sprung individually. This results in what is known as “four-wheel independent suspension”. Any suspension that can be used on the front of the car can be used on the rear. Of course, in the rear of the car, the steering rack- the assembly that includes the pinion gear wheel and enables the wheels to turn from side to side-is absent.

The sway bar merely ties the left and right suspension together. When one wheel either lifts or drops quickly the bar transfers some of the developed energy to the opposite side. This minimizes rolling or wallowing of the vehicle.

A strut is a structural piece designed to resist pressure in the direction of its length. Most shock absorber struts in used rear suspension assembly are hydraulic units which force fluid through restricting openings in the valves. This restricted flow serves to slow down and control rapid movement in the car springs as they react to road irregularities.

You can either order these online / offline. 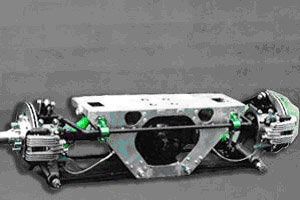 The world isn't the same as it was fifty years ago. We're on the brink of a global disaster with warming and pollution. At Automotix, we take these things into consideration and have delivered cost-effective, eco-friendly options for the many consumers out there. Automotix does its part to help the environment by recycling used parts and keeping junk scraps - rubber, metal, and plastic - out of the environment.

The United States is one of the largest producers of non-degradable scraps. As citizens, we it to ourselves to do our part to reverse this trend - by purchasing used parts from Automotix, you're not only saving money, you're helping to heal the environment.

Find below some examples of used Rear Suspension Assembly requests

This complete guide is filled with valuable tips on how to buy used parts, where to look for quality salvage parts, how best to determine a fair price, ways to validate salvage yards, and how not to get ripped off by fraudulent wrecking yards. A must have for anybody buying parts.
Get your copy now!